Hilda Dokubo has hit back at a follower who called her out for challenging pastors amid the Coronavirus pandemic. 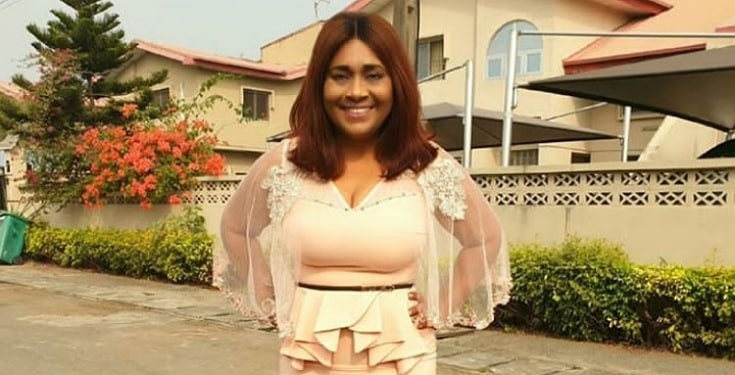 Hilda Dokubo called for pastors who are “convinced” that they have the “supernatural powers to heal” to go to hospitals and heal sick Coronavirus patients. 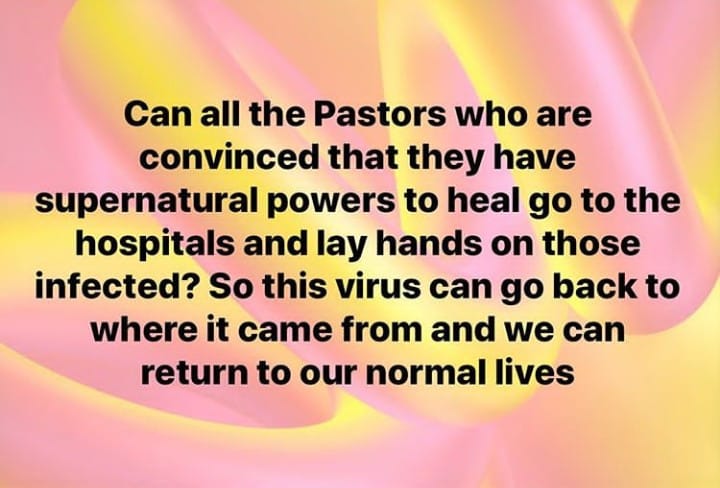 One follower felt she was “challenging God” and slammed her, writing:

“@hildadokubo you’re already challenging God and his healing powers by making this statement. You won’t be focused keep mocking Christianity that’s why most celebrities like you end with one terminal sickness with no human evenhelp (sic).”

And Hilda responded: “@katchychoco “how bad is your terminal disease?”

Kate Henshaw calls out AGN President, Emeka Rollas after Senator Abbo is made a patron

Nollywood actress, Kate Henshaw has also called out the President of Actors Guild of Nigeria (AGN) Emeka Rollas over the enlistment of Senator Elisha Abbo as a patron of the association.

In her tweet, the veteran actress stated that the Adamawa lawmaker who was spotted in a video months ago assaulting a nursing mother in a sex toy shop’, is not worthy to be a patron of AGN.

Kate Henshaw added that there are women in the guild and they don’t want to be slapped. She tweeted;

Emeka Rollas, I cannot find your handle on Twitter, my name is Kate Henshaw and I do not mince words when I say @AbboElisha is NOT worthy to be a patron of the Actors Guild of Nigeria. We have women in this guild and we do not want to be slapped!!

This is coming after veteran actress, Hilda Dokubo spoke up against the enlistment of Senator Abbo as a patron of AGN.

Hilda Dokubo reacts to Senator Abbo being made AGN Patron

Veteran actress Hilda Dokubo has reacted to Adamawa-born senator, Elisha Abbo being made a patron of the Actors Guild of Nigeria.

Recalling how the lawmaker was spotted in a video assaulting a nursing mother in a sex toy shop, the veteran actress stated that making an “abuser of women a Patron of Actors Guild of Nigeria is an unpardonable abuse”.

Hilda Dokubo who called for delistment of Senator Elisha Abbo from AGN’s list of patrons, insisted that every attempt at rubbishing societal values with such appointment must be stopped.

An abuser of women as Patron of Actors Guild of Nigeria is an unpardonable abuse of the rights of all the females in the creative space especially #actors.

We must stop every attempt at rubbishing our values as a people with such appointments in whatever guise. Consequently, Senator Abbo #sextoysenator must be delisted from our list of Patrons now.”

Tonto Dikeh took to Instagram to wish her son’s nanny a happy birthday but some followers had a problem with the fact that the nanny’s photo was not used.

The actress shared photos of the delicacies prepared to celebrate the nanny’s birthday. This included cake, salad, Jollof rice, and more.

On the cake was written: “Happy birthday best nanny in the world.”

Tonto went on to express her gratitude and love for the nanny in three different Instagram posts.

In one post, Tonto added that she gave the nanny 400,000 Naira as a birthday present.

Well, some of her followers wondered why she did not put up a photo of the nanny and they questioned her. Someone asked if it’s an “audio nanny”, and one follower brought up the incident with Tonto’s ex-husband where he mentioned that he’s not been allowed to see his son under the guise that he doesn’t have a nanny.ALSO READ:   ‘You practically are my Life/ My World/ My Joy’ – Tonto Dikeh celebrates her son as he turns 4 today

Tonto’s followers then called for the actress to show a glimpse of the nanny, even if it’s just her back.

However, Tonto responded, telling them that for security reasons, she can’t show her child’s nanny.

She wrote: “When you become a mother, you will understand the importance of keeping your kid’s nanny private. E get some things wey na only maturity of motherhood fit teach you.”

The “Egberi papa 1 of Bayelsa”, Timaya, took to Twitter to drop a comment that is sure to rattle his followers this Monday morning.

This is not the first time the talented singer would be making controversial comments as he recently called out fellow celebrities for wearing fake designers.

The actor made the announcement on Monday, March 16, 2020, via a short video on his Twitter page that he’s tested positive for COVID-19.

Idris said he received his test results Monday morning.
So far, the “Luther” star said he feels “OK” and is showing no symptoms, according the video posted to Twitter.
Elba said he had been isolated since finding out last Friday that he had been exposed to someone who tested the positive.

I quarantined myself and got a test immediately and got the results back today. This is serious. Now is the time to think about social distancing, washing your hands.

He encouraged people watching to practice social distancing and be diligent about hand washing, emphasizing the point that there are asymptomatic people are out there, like himself.
“Stay home people and be pragmatic,” he wrote.
He added: “Look we live in a divided world right now…but now is a time for solidarity. Now is a time for thinking about each other. There are so many people whose lives have been affected.”
Elba’s wife, Sabrina Dhowre, appeared beside him in his video. Elba said she has not been tested but was “doing OK.”
Elba, who is known for work as Heimdall in the Marvel film universe and recently appeared in “Cats,” said he would provide updates on his condition.
“So far, we’re feeling OK. Stay positive and don’t freak out.”
Idris Elba is not the only high profile star to share news of his coronavirus diagnosis.
Tom Hanks and Rita Wilson announced they had tested positive for coronavirus last week.
On Sunday, Hanks provided an update on Instagram, sharing a photo of his vegemite and toast set beside a kangaroo toy.
“Thanks to the Helpers. Let’s take care of ourselves and each other,” he wrote.

The reality TV star snagged the award of the best dressed for the event.

Cubana Chiefpriest in his congratulatory message sarcastically stated that the win has been causing trouble in Lagos.

“#MyOwerri🇳🇬 Girls Are Made To Shut Down🔥 We Own The Highlights 📺 Deal With It !!!! @official_mercyeke Congrats 🍾 Ada Owerri🇳🇬 Your Award 🥇 De Cause Fight For Lagos🇳🇬 N.B… Get YourSelf An O’Town🇳🇬 Girl 👧 @swankyjerry Take 🖐 #CubanaChiefPriest🔑 #CelebrityBarMan🌟”ALSO READ:   Swanky Jerry slams Toyin Lawani for mocking Mercy Eke after she emerged ‘Best dressed female’ at AMVCA

Singer Harrysong stepped out in this very unique ensemble to the 2020 AMVCA which held in Lagos last night.

As usual, some of his followers who felt his outfit was out of place, took to his comment section on Instagram to bash him for wearing such an outfit to AMVCA 2020.

While some followers felt he looked so childish and immature in the outfit, others insisted that he fires his stylist immediately.

Harry took out time to fire those criticising his outfit.

See the comments and his response below:

CIARA’s TEXAS CONCERT HAS BEEN SUSPENDED DUE TO CORONAVIRUS

Grammy-winning singer Ciara is the latest musician to postpone a concert because of the rapidly spreading coronavirus.

Ciara, who is pregnant, was set to perform in Texas at the grand opening of the new Fort Hood USO on March 19 but announced recently that the event has been suspended.

“With the continued spread of the coronavirus throughout the U.S., as a pregnant woman, my doctors have advised me to limit travel and large group gatherings,” Ciara said in a statement.

“I am disappointed I won’t be able to return this month to the place where I was born, Ft. Hood Texas, and put on the amazing show we had planned.”

The grand opening of the new Fort Hood USO will now take place in the summer and the concert will be rescheduled for later this year.

“I urge everyone to be diligent in taking steps to stay healthy and safe,” Ciara said.

EGUNGUN BE CAREFUL…OBESERE, HOPE YOU TAKE YOUR OWN ADVICE

If you’ve been on Social Media lately, most especially Twitter, then you’d have come across Fuji royalty, Abass Akande Obesere. If you don’t know who Obesere is, Obesere is a popular fuji musician that rose to prominence about 18 years ago with his lewd, mostly hilarious lyrics and alternative dress sense.

Recently, he has become the new meme king and Twitter has birthed pop culture life into him. His ‘Egungun Be Careful’ has resurfaced and is doing mad numbers and Obesere has rightfully done what he is supposed to do and that is to leverage on the buzz by doing interviews, collaborating and even as far as opening a twitter account.

A wise man once said ‘Egungun be careful, na express you dey go’, and that wise man is Obesere himself. See here’s the thing, the Nigerian music industry and the music industry in general would chew you up and spit you out. Remember 2018/ 2019 when there was a mini Duncan Mighty resurgence? Two years, 1 million features and affiliations with A-Listers later, Mr Duncan is back in PH and the Lagos audience have totally forgotten about him.

Right now, Obesere is in the studio with Zlatan, and you can bet on it, if the song becomes a hit, other artists are about to rush to the Obesere feature-bank to cash in on the hits.

Egungun be careful, I hope you listen to your own advice Mr Obesere because these music don’t care about you.